Over five years in the making Radical Lambeth is finally finished and available to buy! Click here to order your copy direct from the publisher

In the 1980s Lambeth was synonymous with rebel Labour councillors, it was a borough which featured regularly in national newspaper headlines for its protests, its squatting, and its resistance to and defiance of central government. From the Town Hall to the front line of Railton Road it confronted racism in the police, the Poll Tax, the Gulf War, and the nascent Thatcherism of the Conservative government. It was a site of overlapping resistance from trade unionists, black residents, the LGBTQ community, and other local people.

Condemned in the press as a ‘loony left’ borough, Lambeth was at the heart of the struggle against the Conservative agenda in the capital. This was a fight for municipal socialism, for solidarity with causes both at home and abroad, and against the crisis of inner city urban life in a decade dominated by greed is good capitalism at the expense of working people.

Based on first-hand accounts of those involved, this book tells the story of Radical Lambeth, an inner London community that fought back.

‘Lambeth was once the citadel of the municipal left, its baroque Town Hall in Brixton a bastion of proud, creative, multicultural socialism. This exceptionally timely book finds how a New Left took power here, how it faced the problem of ‘socialism in one borough’, and how it was gradually worn down by inertia from within and repression from without. It’s a great story, brilliantly told by Simon Hannah, and an exemplar, both positive and negative, that a new generation of London socialists could learn a great deal from.’ Owen Hatherley, author of Red Metropolis and culture editor of Tribune

‘This book is a welcome challenge to the longstanding myths and lies about Lambeth in the 1980s.’ Joan Twelves, former Lambeth Council leader

The much anticipated history of Lambeth in the 1980s is due out (social and economic crisis permitting) at the end of the year with Breviary Stuff who specialise in radical local histories.

The book started off as a history of Lambeth Council during that decade when it was regularly labelled as ‘loony left’ – I wanted to look into what actually happened, to strip away from of the myth and explain the politics of the time.

But the more I read the more it became clear that there was so much going on, how could you write a history of Lambeth and not deal with the riots, the fight against police repression, the huge squatting movement, the ‘Front line’ of Railton road, the LGBT scene and the rest?

Lambeth was a borough of resistance with a  fascinating political history. Of course there were also tensions and problems, legitimate criticisms and mistakes. Radical Lambeth is sympathetic to the left wing struggles taking place but it is not a hagiography or a puff piece, I want to look at some of the murkier aspects of local politics as well as how effective the left struggles and strategies were.

As such, I hope this book does it justice.

For more details of the launch of Radical Lambeth and any public meetings coming up, please get in touch!

Bulletins from Lambeth NALGO as the first battles over cuts are happening at the Council. 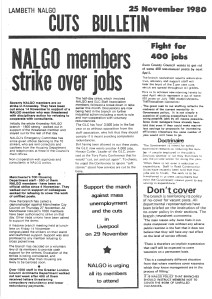 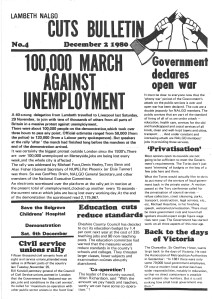 This is from Chapter One of the forthcoming book Radical Lambeth (published by breviarystuff.org.uk).

The Labour Party won the Lambeth election in 1978 and the new left leadership of Ted Knight and his comrades had big plans for the borough….

“The day after winning the council, Knight entered to the Town Hall determined to grab control with both hands.

The ornate Town Hall, designed by the Scottish Architect Septimus Warwick, shaped like a wedge and subsequently modified according to a baroque style, remains one of the most impressive local government buildings in London. The clock tower stands at an imposing 134 feet, guarded at four corners by statutes representing Justice, Science, Literature and Art. Previously the Chief Executive had enjoyed large office space whilst the leader of the council had to work in a small room alongside their chief whip and a secretary. Prior to 1978, the head of the council would usually pop into the Town Hall after work, have a chat with the CEO and perhaps imbibe a drink whilst the officer briefed him on their days work. Knight made it clear that he would be working at the council full time and quit his job as a contracts manager of a cleaning firm to work on a £60 a week allowance for attending committee meetings on the basis that “when you are in control of a £150 million budget it is nonsense to suggest that you can do it in your spare time.”

A journalist at the time commented “there was nothing ostentatious about his life style. He drives a 12 year old Rover, smokes thin Dutch cigars and wears sober business suits.”

Arriving to work in his most sober suit, Knight immediately moved the CEO into the smaller office and ensconced himself in the larger room. His office had an imposing desk with chairs for visitors and a conference table for meetings. This was no part time leadership and they were intent on the balance of power shifting from the officer caste to the elected politicians.

With Labour still in government and the radical left moving into position in local councils, Knight and his allies were confident that they were well placed to leverage their position for the cause of socialism – high spending, lots of jobs, an expanded industrial base in the borough. The manoeuvres to get to power in the Lambeth Labour group had been drawn out but the result had been an unqualified success for the left. For the time being, the Knight had become the king.”

Local reports on the anti Poll Tax protest outside Brixton Prison in October 1990 in solidarity with prisoners from the recent Trafalgar Square demonstration which turned into a police riot on 31 March that same year.

Kate Hoey’s parachuting into Vauxhall by Neil Kinnock sent shock waves through the local party. They had wanted a black candidate but the most likely ones to win were considered too left wing by Labour’s leadership so Hoey, a Kinnock loyalist, was imposed as a candidate with a “like it or lump it” note from Labour HQ.

Qucik background, the previous Vauxhall MP had been Stuart Holland, the chief theoretician of the Alternative Economic Strategy that formed the bedrock of Bennism and the Labour left in the 1970s and 80s. He quite being an MP in 1989 to go into academia, leaving a vacancy in Vauxhall, one of the safest Labour seats in the country.

This is an exert from Radical Lambeth about what happened next…

END_OF_DOCUMENT_TOKEN_TO_BE_REPLACED

In the late 1980s a man called Ron Tod fixed up a dilapidated old house in Vauxhall with the view to selling it and sending all the money to Bluefields in Nicaragua.

Below is some of the media coverage about the house, and this article sums up why Tod did it and all the help he got to make it happen.

The house was eventually sold and the money use to fund building projects in Bluefield’s on the Atlantic Coast. 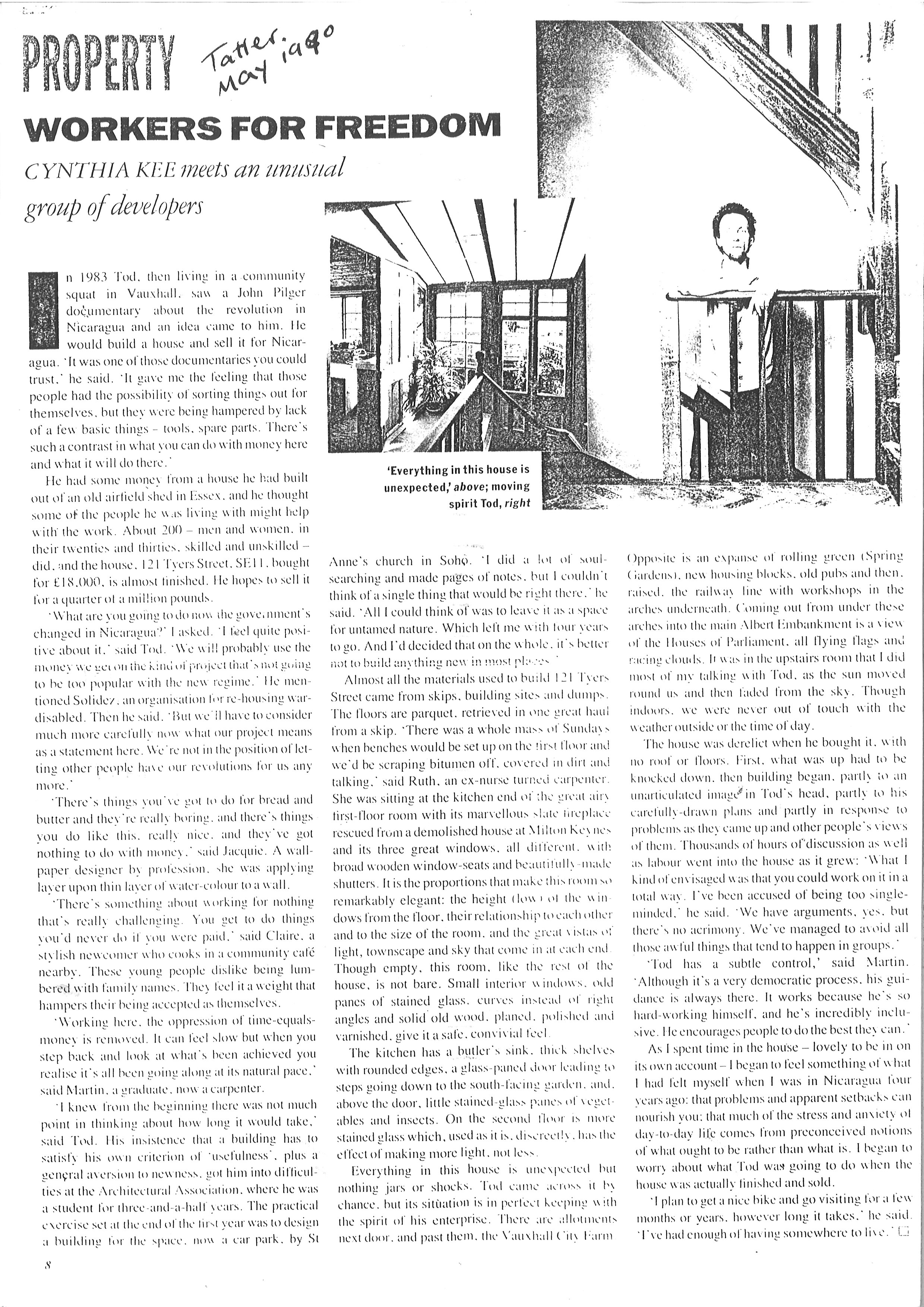 Article about the ‘Nicaragua house’ in Vauxhall, published in New Statesman and Society May/June 1989 END_OF_DOCUMENT_TOKEN_TO_BE_REPLACED

Leaflets from Lambeth Against the Poll Tax

Some leaflets and other materials from Lambeth Against the Poll Tax