“The Labour Party has always quietly congratulated itself as being, almost by definition, the anti-racist party. It may be true that very few Black comrades take up positions as Party activists, that fewer still are elected in the name of the Labour Party to public office and that a Black delegate to Annual Conference is still a rarity, but the reasons for this, whatever they may be, cannot be the racism of the Labour Party structures themselves. Just how true is this myth ?”

The late 1980s saw a concerted push by members of Vauxhall Labour Party, in unison with other members across the country, to establish Black Sections in the Labour Party.

Black Sections would be self organised, autonomous groupings within the Labour Party, wit the aim of increasing black and minority ethnic representation in the party but also in elected positions. They were opposed by many Labour Party members are being “divisive” or “segregationist”. Today self organisation is much more accepted across the labour movement. 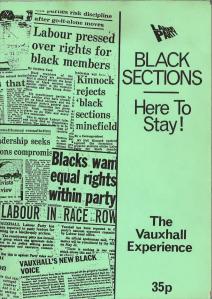 In 1987 BME members published a pamphlet about the experiences of organising in Vauxhall Labour Party to make the case for black self organisation. You can download the pamphlet by clicking on the link below.

One thought on “Black Sections in the Labour Party”